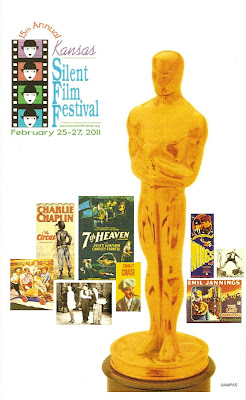 Since the Kansas Silent Film Festival
in Topeka coincided with Academy
Award weekend this year, the theme
of the festival was the first year of the
Oscars (1927-28, the only year that
silent pictures dominated the awards),
and the three-day program was
peppered with winners and
nominees.  In fact, Oscar
himself put in an
appearance...

...in the form of Benjamin Glazer's
award for the screen adaptation
of 7th Heaven, which was proudly
displayed in the lobby of the White
Concert Hall on the Washburn
University campus. If you've ever
wondered what an 81-year-old
Academy Award looks like -- and
they don't come any older -- here
he is, ensconced in his glass case
like Snow White (only standing up).
You can click on the picture and
"+" him up to see that, classic
though he may be, he does
carry his share of age marks.
(By the way, do I need to specify
that the Academy Award statuette
and the nickname "Oscar" are
registered trademarks of the
Academy of Motion Picture
Arts and Sciences?
Let's not forget that!) 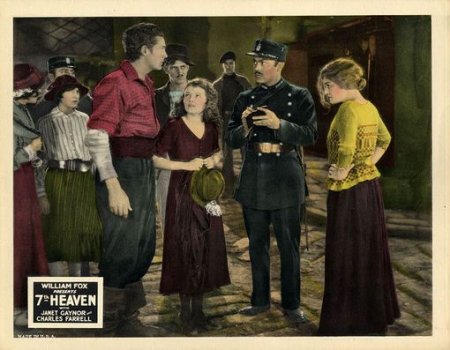 Speaking of 7th Heaven, I have to say Saturday night's screening of this touching romance between a boastful Paris sewer worker (Charles Farrell) and a mistreated street waif (Janet Gaynor) was the highlight of the weekend for me. I'd seen it before, but this time was something above and beyond: the festival screened the personal print of film preservationist David Shepard (a special guest at the event, he also delivered a lecture to accompany screened samples from his new DVD collection Chaplin at Keystone). Shepard's print, in turn, was carefully and lovingly copied from Janet Gaynor's own personal print, and the exquisite tinting of the film was a revelation.
Just so we're clear, I don't mean to suggest that the picture was tinted like this hand-colored lobby card. I mean stock-tinting, coloring the film stock a shade to match the mood of a scene -- blue for nighttime, amber for candlelight, etc. Tinting was virtually universal in the silent era, and it's the one facet of silent movies that now seems all but lost beyond recall. Modern digital tinting on video releases isn't always pleasing to the eye -- and in any case, so few tinted prints have survived that we can't always know how authentic such efforts are. Gaynor's print presumably dates from 1927, so here was an opportunity to see the real McCoy. I don't know how many in the audience appreciated the rarity of what they were seeing, but they certainly appreciated the picture itself; when Gaynor's timid little Diane finally turned on her physically abusive sister, the auditorium echoed with applause and cheers. (I guess film tinting is one of those lost arts, like hand-tinted photos in the manner of the lobby card here. But there must have been aesthetic rules and guidelines, and artisans who specialized in the process and were admired accordingly, just like editors and cinematographers. Has there ever been a full-length history of the art of tinting? There's certainly a book in it. There's a chapter on tinting in Kevin Brownlow's The Parade's Gone By that's as excellent as the rest of the book, but other than that I don't know.)

One more note about the title of 7th Heaven: I've always seen it referred to (and referred to it myself) as Seventh Heaven. But "7th" is what appears onscreen, so properly speaking, that should be the title. 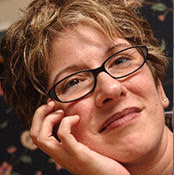 Another special guest was Annette D'Agostino
Lloyd, who discovered the comedies of Harold
Lloyd when she was a teenager and has
grown up to write a number of books
on his work, as well as hosting
Hello, Harold Lloyd, her own Web site
devoted to him. (And by the way, she's
no relation to the great comedian;
her married surname is just one
of those amazing karmic
coincidences.) 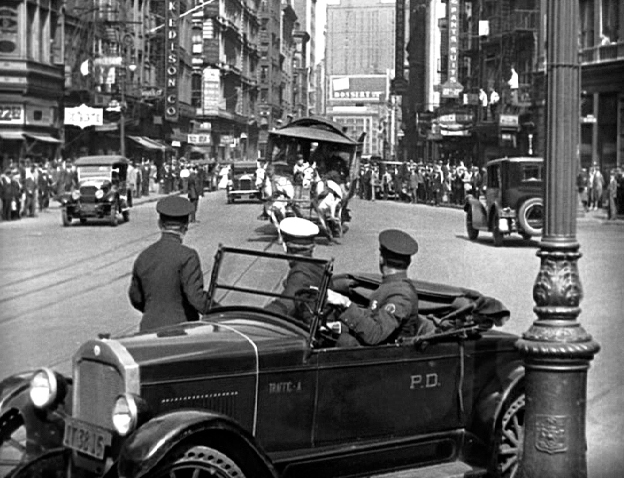 Ms. Lloyd addressed the audience Friday night to introduce Speedy (1928), Harold Lloyd's last silent comedy and one of his most stylish, with Harold at his ingenious and sympathetic best. She warned us that the climax of the picture, with our hero driving a horse-drawn streetcar at a mad gallop through the streets of New York in a desperate race against time, was one of the greatest chase scenes of the silent era. And she was right. The sequence is nothing less than astonishing -- it rivals the chariot race from either version of Ben-Hur, and it absolutely puts The French Connection to shame (43 years before the fact). And it's funny to boot. 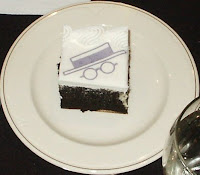 And one little detail that's too
much fun not to share. Annette
Lloyd was also the after-dinner
speaker at the festival banquet
Saturday night, speaking (naturally)
on her favorite comedian. In keeping
with the subject of her talk, the
KSFF chose an appropriate
design for the evening's
dessert: 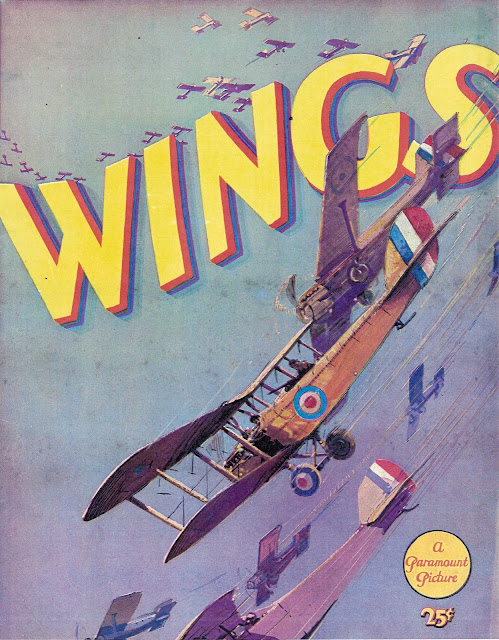 The festival culminated on Sunday afternoon with Wings, director William A. Wellman's tribute to the airborne fighters of World War I (and the picture that put him on the map). To see Wings on the big screen is to understand at last why it won the Oscar for best picture; that's one thing it has in common with both Lawrence of Arabia and Oliver! Clara Bow loves Charles "Buddy" Rogers, who loves Jobyna Ralston, who loves Richard Arlen -- all while the Great War rages and Rogers and Arlen take to the sky in thrilling combat. The aerial action remains riveting, with no process photography and very little miniature work, and the action on the ground is handled well enough that you don't grow impatient for the dogfights to resume. (There is, however, a basic flaw in the movie's portrayal of Rogers's character: any man who would pass up Clara Bow for that namby-pamby, two-timing Jobyna Ralston is obviously unfit for military service.)
Kudos all around for the class act that is the KSFF -- to festival president Bill Shaffer, vice president Denise Morrison (who also provides chatty, informative intros to all of the screenings), and the festival's board of directors. And a special nod to the festival's musicians, keeping alive another not-quite-lost art: Marvin Faulwell (organ), Greg Foreman and Jeff Rapsis (piano), Bob Keckeisen (percussion), and special guests The Mont Alto Motion Picture Orchestra of Boulder, CO. Like Cinevent in Columbus, OH, the Kansas Silent Film Festival now has a permanent place on my calendar. I'm already looking forward to next year.
Posted by Jim Lane at 11:24 AM