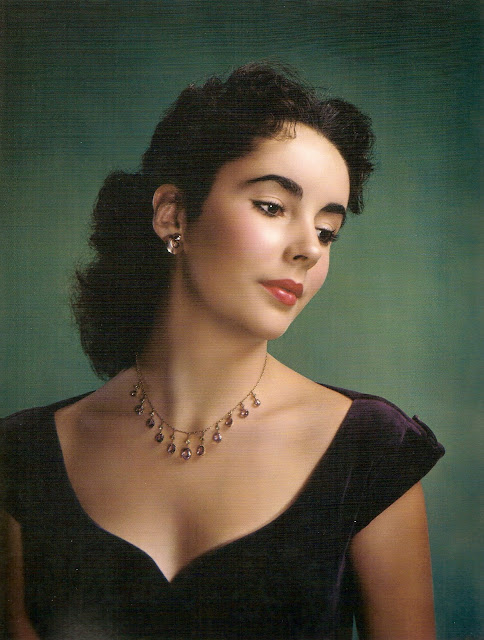 It seems wrong not to say something about
the passing of Elizabeth Taylor, but what is
there that hasn't already been said? There
are only a handful of performers who
managed to move from childhood stardom
to adult careers and make it stick -- Dean
Stockwell, Mickey Rooney, Jackie Cooper,
Roddy McDowall (there are also Jodie
Foster and Kurt Russell, but they were
only child actors, not stars). Even in
that small company, Taylor may be
unique: she rose to the top as a kid
and stayed there to the very end;
in fact, in a way, she even redefined
what "the top" actually was.

She didn't make much of an impression
in her first picture, There's One Born
Every Minute. But then, neither did
the picture itself, a piddling little Hugh
Herbert programmer for Universal
that not even Variety, who covered
just about everything, bothered to
review. Elizabeth (she hated being
called Liz, so I won't) was no more
than ten, and vying for attention with
Hugh Herbert in three roles (the
mind boggles!). Who know, maybe
she was hoping no one would notice
her. In later life, she always had a
pretty sensitive b.s.-meter; and it
might well have been on line even
as early as that. 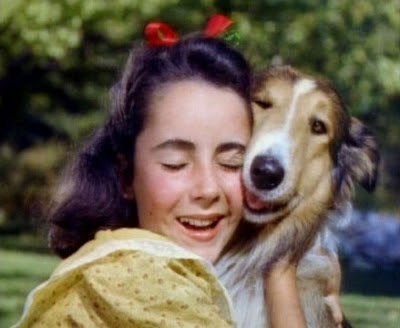 In any case, her second picture was another
kettle of fish -- or rather, another bowl of kibble:
Lassie Come Home. I wasn't there at the time,
but I have it on good authority that people
came out of theaters asking two questions:
Wasn't that dog amazing? and Who on earth
is that little girl? ("A pretty moppet," beamed
Variety.) By that time (LCH was released in
December '43) Elizabeth was going on
twelve. So what was different?
Was it puberty?

I think it was Technicolor. Taylor's creamy
complexion, raven hair and (most particularly)
violet eyes came across in color as they couldn't
in black and white. Uncredited (and unnoticed)
bits in Jane Eyre and The White Cliffs of Dover
only go to reinforce the point. Then it was back
to Technicolor for... 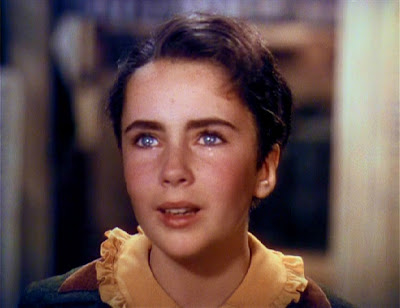 ...National Velvet. Pauline Kael once said that this was "the high point in Elizabeth Taylor's acting career," and I think she's right. At any rate, beginning with this movie, Elizabeth would never go unnoticed again.

She grew up fast at MGM, and it wasn't long before her beauty stood out even in black and white. She's 16 in the Clarence Sinclair Bull portrait that leads off this post... 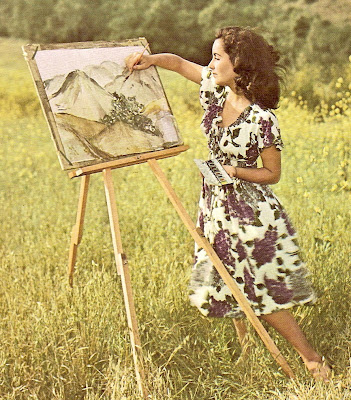 ...15 here, touching up a water color (or pretending to)
in the Hollywood Hills. By 1949, at the ripe old age
of 17, she was playing the wife of 38-year-old
Robert Taylor in Conspirator.
None of these, of course, are what most people
think of when they hear Elizabeth Taylor's name. 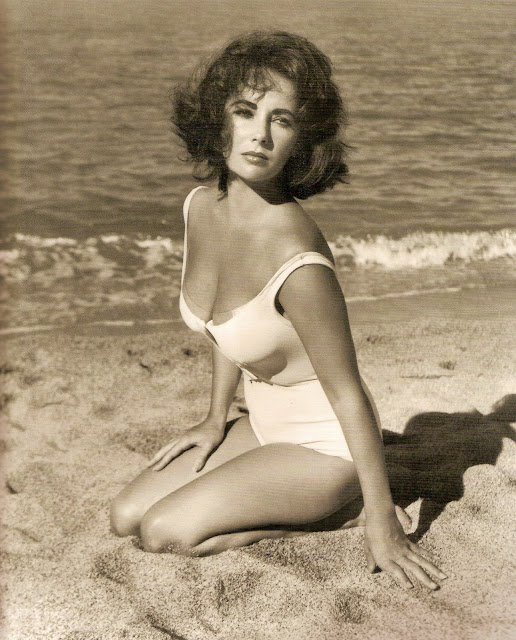 This is more like it, right? Suddenly, Last Summer may not be the hot seller on Amazon or in Netflix queues that it was in 1959 theaters, but this was one of the iconic movie images of the 1950s, right up there with Carroll Baker sucking her thumb in Baby Doll, or Burt Lancaster and Deborah Kerr on the beach in From Here to Eternity. (The fact that Catherine Holly, Taylor's character, told psychiatrist Montgomery Clift that the bathing suit made her look "almost nude" when it got wet no doubt stoked the fantasies of millions of red-blooded American men. Did any of them see the movie over and over, hoping that this time she would really go into the water?) Elizabeth is 27 here, on the way to the third of her five Oscar nominations (she won twice), and she's been officially grown up since she and Clift (and director George Stevens's camera) were more intimately involved in A Place in the Sun in 1951. 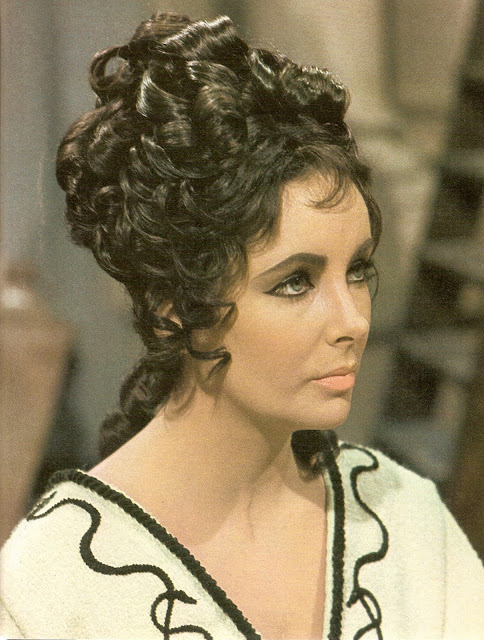 For most people who remember those days, Elizabeth Taylor's life and career tend to boil down to (1) everything before Cleopatra and (2) everything after. It's impossible for people today, jaded by a nonstop parade of showbiz media circuses -- from Madonna to Britney to Lindsay to Charlie -- even to imagine what a riveting can't-look-away spectacle that trainwreck of a production was. You just had to be there -- and by "there" I mean anywhere on planet Earth from 1959 to 1963. You couldn't get away from it. Elizabeth's brush with death-by-pneumonia in a London hospital was only the beginning, shutting down production until the English weather, never exactly balmy, turned so crummy that everybody had to start all over from day (and dollar) one in Rome. It wasn't hype or hysteria: Elizabeth nearly checked out then and there; her tracheotomy scar is clearly visible in this picture of her in costume and makeup, looking weary and numb waiting for director Joe Mankiewicz to call action.
"Everything before and after Cleopatra" really means everything before and after Richard Burton, and I'll bet that's how Taylor tended to think of it herself. Burton accounted for two of her eight marriages (and she for two of his five), ten years the first time and ten months the second. If Burton had lived past 1984, they might have had a third go-round (ten weeks?), and a fourth (ten days?); they were clearly the loves of each other's lives, even if they couldn't hold it together and often seemed to bring out the worst in each other. To people in the 1960s it looked like the love affair of the century. To me it still does, and I don't think I'm alone. 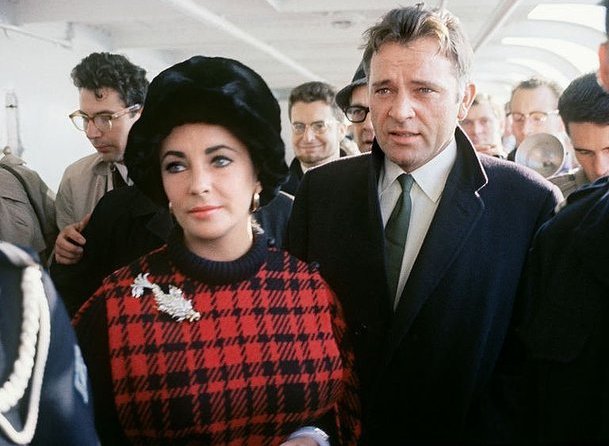 Here's another iconic picture, this one from real life, though it could almost be a scene from their movie The V.I.P.s. Judging from the faces and clothes, that year (1963) is probably about right, give or take a couple. They seem to be trying to inch their way toward some anonymous airport VIP lounge, jostled by a combination of entourage and paparazzi, a breed of "journalist" that their affair and marriage virtually (albeit unwillingly) created. She looks resigned, he looks harried. (And who's that guy in the center background, and why is he the only one smiling?)
With all Taylor's heartaches, sorrows and physical ailments (the latter beginning with a fall from a horse during National Velvet), it's remarkable in a way that she made it to 79. Marilyn Monroe couldn't do it, or Judy Garland. Elizabeth Taylor outlived them, and nearly all her leading men, from Roddy McDowall and Robert Taylor through Montgomery Clift and Van Johnson to Marlon Brando and Richard Burton. Did she thrive? I don't know. But she survived, and prevailed. 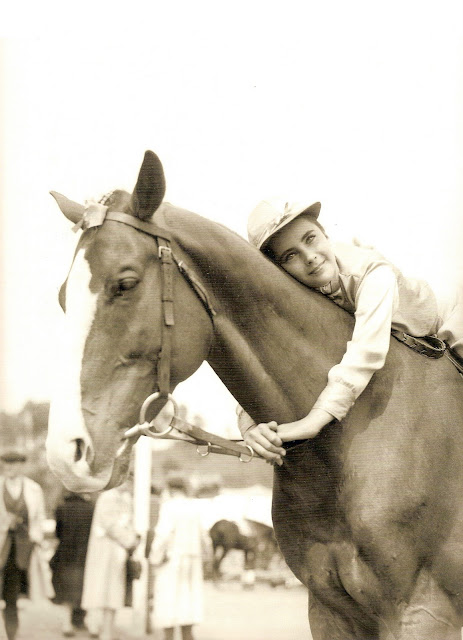 I love this photo by Otto Dyar, and I want to close with it. It's from the set of National Velvet, obviously. Elizabeth's blissful love of horses permeates the picture, blesses and ennobles and exalts it. I believe that this 12-year-old child-woman looks more genuinely and serenely happy here than in any other picture I've ever seen of her, at any age. This is how I want to remember her.
Posted by Jim Lane at 3:45 AM

Great write-up/tribute with many aspects I did Not know about her.

The guy smiling in the middle of second to last the picture is doing what is now called photo-bombing. However, this is a fairly recent phenomenon and this may very well be the oldest known photo-bomb.

Thanks, Gabriel. I guess it's nice to know someone in that picture is having a good time. Still, I wonder: who is he, and how did he get close enough to bomb the photo?

I think you'll want to put a facebook button to your blog. Just bookmarked the blog, but I must complete it manually. Simply my $.02 :)

Thanks for the suggestion, Anon; I'll look into it.