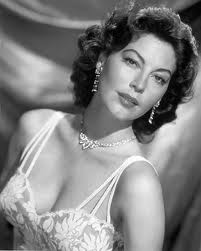 I once mentioned to my uncle (a movie buff like me)
that I thought Ava Gardner was the most beautiful
woman who ever stood in front of a movie camera.
Of course, that's a subjective call if there ever was
one; plus, considering how much movie-camera
time has been devoted exclusively to photographing
beautiful women over the past ninety years or so,
the field of candidates is awfully crowded. You could
run the question by anybody -- even limiting the
time period to, say, 1915-65 -- and I'll bet you'd
have to collect several hundred votes before you
got ten who picked the same woman.

Anyhow, meaning no disrespect to whoever's name
popped into your head just now, that's what I said
at the time: Ava Gardner topped my list. My uncle
considered the idea, and said two words: "Maureen O'Hara."

Well, now, there was food for thought. So I
considered his idea, and I said, okay,
Ava Gardner for black and white ... 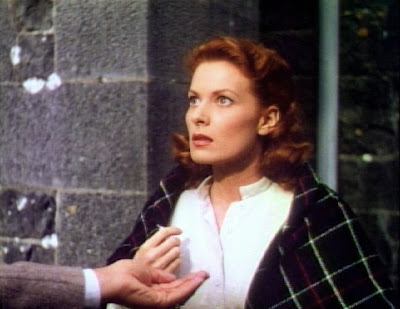 ... and Maureen O'Hara for Technicolor.
No doubt about it, when those old
three-strip cameras were cranking
and those blistering kilowatts of
light flooded the set, red hair and
green eyes -- to say nothing of the
face that went with them -- could be
pretty powerful selling points.
Which raises the question: How much does the
camera matter?  A lot, obviously, but exactly
how much? Can it even be quantified?
I never met Ava Gardner or Maureen O'Hara,
but I've certainly seen plenty of their movies,
and publicity and paparazzi photos, in both
black and white and color -- enough to
convince me that neither of them were
exactly dowdy scullery drudges
away from the set.


On the other hand, I have met Elle Macpherson; I interviewed her in 1994 when her supermodel career was at its peak. And you know what? She was more gorgeous in person than she is in any photograph I've ever seen of her, and even more than she was in the movie (Sirens) that I was interviewing her for. I know it sounds like a bizarre thing to say about a woman who appeared on a record five Sports Illustrated swimsuit issue covers, but I was there and I saw it with my own eyes: no camera has ever captured the full beauty of Elle Macpherson.
We're used to thinking about all the things the camera adds -- I mean besides the proverbial fifteen pounds. Garbo was famously ordinary off-camera, and she knew how much her mystique owed to cinematographer William H. Daniels; he shot 21 of her 25 Hollywood pictures, and the men who shot the others -- Joseph Ruttenberg, Karl Freund and Oliver Marsh -- were no slouches either. But the camera can take away, too. I saw it with Elle Macpherson, and it makes me wonder whether (incredible as it seems) Ava Gardner and Maureen O'Hara might have looked even more stunning in person than they do in that glamour shot above, or that frame from The Quiet Man.
Movie lovers are slaves to technology, every bit as much as the stars and directors. We're dependent on the technology for our perceptions, and perceptions change as the technology improves or deteriorates. For example, the recent Blu-ray and DVD release of The Red Shoes has forced me to come up with a new choice -- at the very least, a new candidate -- for Most Beautiful Woman Who Ever Stood in Front of a Movie Camera: 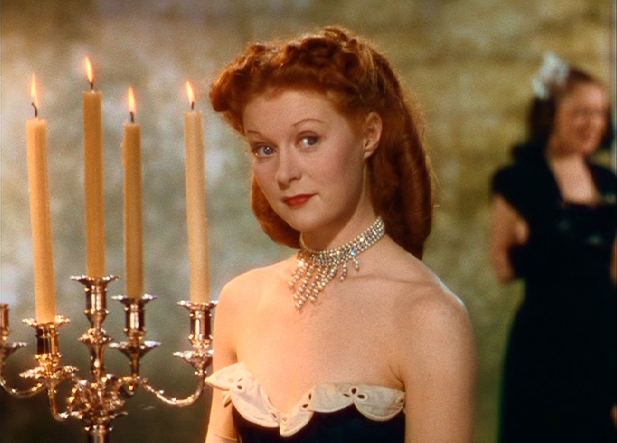 Moira Shearer as the doomed ballerina Victoria Page. The painstaking restoration of The Red Shoes undertaken by the UCLA Film & Television Archive and the British Film Institute reportedly took two-and-a-half years, and it was worth every minute. I read somewhere once that The Red Shoes was the Technicolor Corp.'s own official choice for the most beautiful Technicolor movie ever made. I don't know if that's true, but I believe it; I've never seen a print of Red Shoes that was less than gorgeous. Even so, I've never seen -- scarecely imagined -- it looking like this. The movie itself, I think, is one of the unique works of art, though to be honest, it's one I admire without entirely enjoying; for sheer pleasure I prefer other Powell-Pressburger pictures like I Know Where I'm Going, A Matter of Life and Death or The Life and Death of Colonel Blimp. But as a sheer exercise in sumptuous pictorial splendor, The Red Shoes is without equal, and this new restoration leaves me wide-eyed and gasping at nearly every shot.

The chief beneficiary of the UCLA/BFI facelift, besides Jack Cardiff's matchless cinematography (only the spiteful insularity of Hollywood can explain why he wasn't even nominated for an Oscar), is Moira Shearer -- the dancer who never really wanted to be a movie star. Whether she's dressed to the nines for a formal reception, as above... 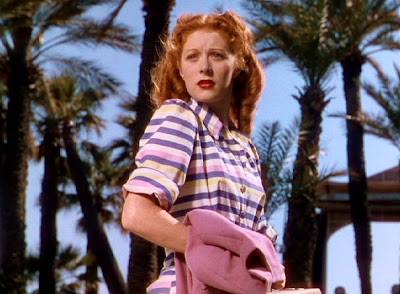 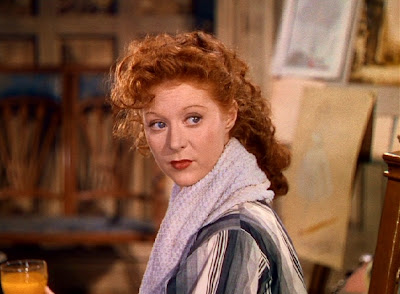 ...tousled after a strenuous rehearsal... 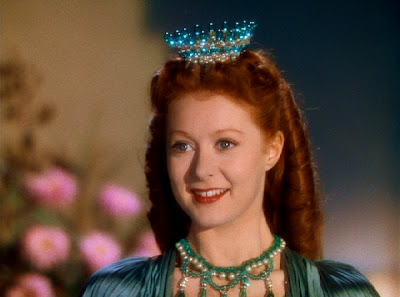 ...togged out for a formal dinner date... 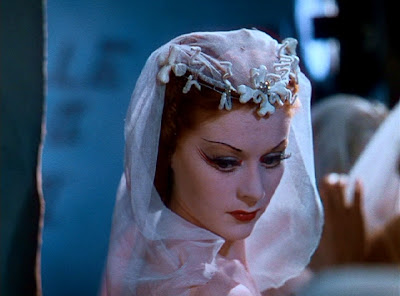 ...larded over with seven pounds of ballet makeup... 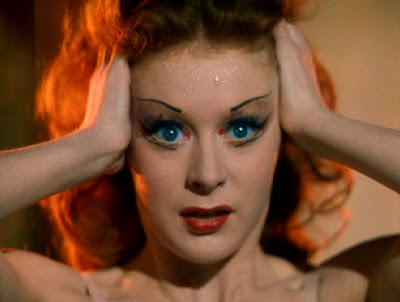 ...or beaded with sweat during a performance, Shearer always looks like seven billion bucks.
What I'm driving at is that all this is the result of improved technology. When my uncle and I had our discussion of Ava Gardner vis a vis Maureen O'Hara, and when we were considering all the legendary screen beauties (Garbo, Dietrich, Grace Kelly, Hedy Lamarr, Louise Brooks, insert favorite name here), I don't think either of us gave a thought to Moira Shearer. Is Moira Shearer -- the Moira Shearer of 1948 -- suddenly more beautiful than she was the last time he or I saw The Red Shoes?
Robert Gitt of the UCLA Film & Television Archive suggests that The Red Shoes may look better now -- clearer, sharper, richer -- than it did even when it was new, simply because of the digital techniques that allow for a precision in processing the Technicolor matrices that goes beyond anything possible in the 1940s, '50s, '60s, or for decades even beyond that. The process of shooting The Red Shoes is over and done with; we can't change what happened on the set, or how Jack Cardiff lit the actors and focused and moved the camera. But what happens from there, between the time the negative comes out of the camera and the moment the finished image is splashed across a screen for discerning eyes -- that process remains malleable, and probably always will (any collector who has watched the color shift and fade on a 16mm Eastman print can easily grasp the concept). Shooting a movie is a finite process, but making the movie can go on and on for years, decades -- in the case of The Red Shoes, even after nearly everyone involved in getting the picture into theaters in the first place is dead and gone. That's why movie buffs before the age of video would travel miles to see yet another print of a picture they already knew by heart, and why they might buy 16mm prints over and over -- then, when video came in, the VHS, the laserdisc, the DVD, the Collector's Edition, the Blu-ray. It's like Shakespeare scholars taking in an infinity of Hamlets; the experience is different every time, and this one just might prove definitive.
So suddenly The Red Shoes looks more glorious than it ever did -- which hardly seemed possible -- and I have a new personal nominee for Most Beautiful Woman Who Ever Stood in Front of a Movie Camera.
And yet, all this may change. If, say, Mogambo or The Quiet Man ever get the kind of laborious restoration that UCLA and the BFI have lavished The Red Shoes, there could be clearer, sharper, richer beauties revealed in Ava Gardner and Maureen O'Hara, and they may again challenge Moira Shearer for the title. Then again, just such a restoration is underway even now on another Powell-Pressburger picture, The Life and Death of Colonel Blimp, and who knows... 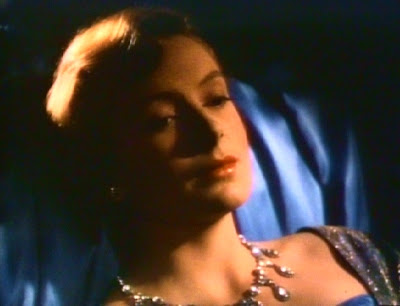 ...the 21-year-old Deborah Kerr just might come out of nowhere to knock them all out of the running.
Posted by Jim Lane at 12:06 AM 1 comments