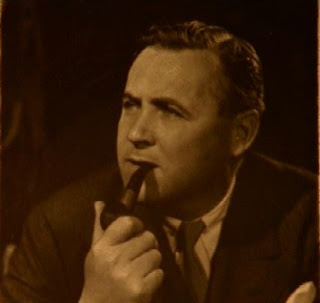 Henry Hathaway once said there was a time when he would have welcomed being called an "accomplished technician" or "studio workhorse." "But the more I think about it, the more I realize it makes me seem to be a genial hack." Hathaway was indeed an accomplished director, and he worked long and well in the studio system, first at Paramount, then for twenty years at 20th Century Fox. But he was nobody's hack.

I guess I've always been a little over-protective of Henry Hathaway. Several years ago I bought one of those big encyclopedias that claim to tell you "everything you need to know" about American movies (actually, that should've tipped me off -- the really good ones don't do that). This one -- well, let's just say it was published under the aegis of a very prestigious group of people. The first thing I did was to turn to the biographical section on directors to see what they said about Hathaway. He wasn't listed. I scanned back and forth across the pages, just to make sure I wasn't seeing what I thought I didn't see. Then I closed the book and never opened it again; when the donation truck came around, into the bin it went.

Whoever compiled that book, I didn't expect them to admire Hathaway as much as I do -- I don't suppose anyone does that. But I wasn't going to let them act as if he never existed. Not if they wanted to take up space on my bookshelf.

I first became aware of Hathaway the night I saw How the West Was Won at the Orpheum Theatre in San Francisco. I was just beginning to notice movie directors; I wasn't one of those film-buff prodigies who could discourse on the Auteur Theory at an age when other kids were reading Fun with Dick and Jane. I knew about Cecil B. DeMille, and Alfred Hitchcock, but everybody knew who they were. And I knew about John Ford, one of the other credited directors on How the West Was Won. George Marshall, the third director, not so much (though I knew about Destry Rides Again, one of his pictures). But Hathaway's name caught my eye for the simple reason that the program said he was born in Sacramento, where I lived. 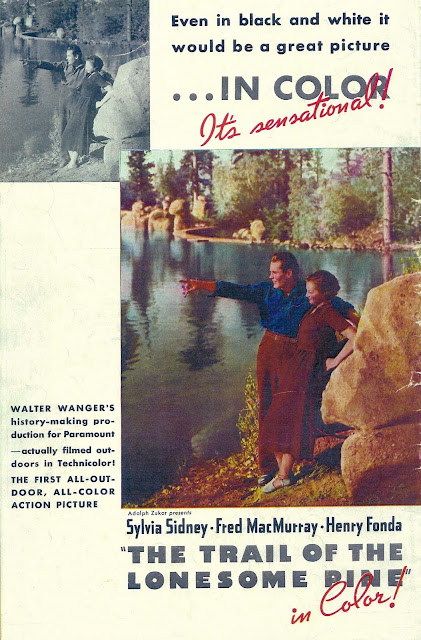 Hathaway was born in Sacramento (March 13, 1898), but it wasn't exactly his home town; it was just where his actress mother happened to be on the point in her tour when his time came. (Traveling theater companies didn't offer maternity leave in 1898.)

Henry Hathaway may well be the only hereditary Belgian nobleman who ever made it as a Hollywood movie director. His name at birth was Marquis Henri Leopold de Fiennes, a title he inherited through his father. Hathaway said his father's name was Henry Rhody, but he appears to have been a bit of a theatrical jack of all trades -- advance man, stage manager, actor -- under the name Rhody Hathaway. Hathaway said his mother's maiden name was Jean Weil, though other sources say she was born Marquise Lillie de Fiennes in Budapest in 1876. I'm inclined to take her son's word on this point, but whatever the case, Mom acted under the name Jean Hathaway, and before long little Henri Leopold had taken it too. (Also, Henry's paternal grandfather was supposed to secure the Hawaiian Islands for Belgium in the 1860s, and settled in San Francisco when the deal fell through. Considering how Belgium later administered its colonial holdings in Africa's Congo, native Hawaiians might have cause to be grateful that Hathaway's grandfather failed.) 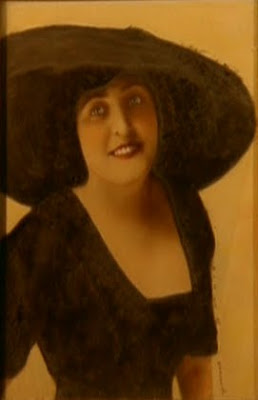 Jean Hathaway seems to have been no ordinary woman. Only 22 when her son was born, by the time they both entered movies in 1911 or '12, she had moved into "character parts" -- somebody's mother or aunt or older sister, or a villainess if one was called for. I don't know how old she is in this picture, but it seems to me she's more or less the same age as Henry in the picture below, taken on the set of The Trail of the Lonesome Pine, when he was 37. 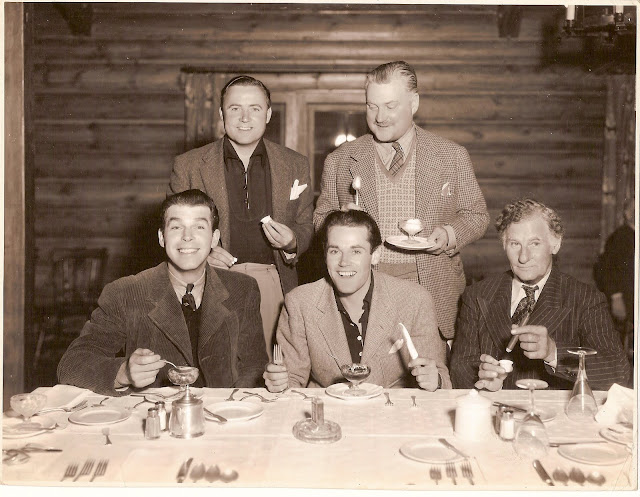 That's Henry standing on the left, next to Nigel Bruce. (At the table are Fred MacMurray, Henry Fonda and Fred Stone.) You can see that Henry certainly took after his mother.

In more ways than one. Rhody Hathaway seems not to have had the theater bug as severely as his wife -- it's never been the most stable career path, and it was downright perilous then. Henry's father eventually left the biz and got into electronics -- a more obviously burgeoning field in the 1910s and '20s -- working on an early x-ray machine. Jean continued to tour, occasionally getting stranded, in those pre-Equity days, when a company would go bankrupt on the road.

When this happened to her in 1911 in San Diego, leaving her broke with no way to get home, she cast about for some kind of job to earn train fare, and landed with the American Film Company in nearby La Mesa. Moviemaking was a footloose operation in those days, grinding out quickie one-reelers for the nickelodeons, but here was steady work in one place, so when she saw that it was going to pan out, she sent for Henry and his sister, who had been living with relatives in San Francisco.

Henry started out as a child actor -- usually, he said, playing the kid in the opening scene who grows up to be the leading man. As he grew into his teens, he went to work at Universal, first as a laborer, then a prop man. (His last acting credit was in 1917, just before a short army stint stateside during World War I.) After mustering out of the army, he went back to movies as a prop man at Goldwyn Studios, then Paramount, where he worked as an assistant director throughout the 1920s, learning the craft under men like Josef von Sternberg and Victor Fleming. He graduated into directing in 1933, remaking silent Paramount westerns for sound -- only on a lower budget, re-using footage from the silent versions wherever possible. ("I had to have the new leads costumed the same as the silent players.")

Few directors had a career to compare with Henry Hathaway's. He literally got in on the ground floor, before there was even a Hollywood as we know it today. He made his first movie in 1911, his last in 1974. He started out digging ditches and lugging equipment, and rose to directing huge projects with the biggest stars in the business. Along the way he pioneered sound, color and narrative Cinerama, the wonder of the age throughout the 1950s. 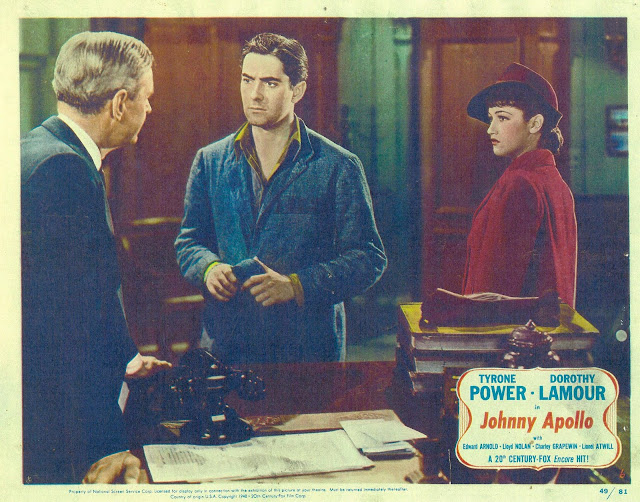 The performances he got from his actors are nothing to sneeze at either. He made a star of Richard Widmark in Kiss of Death (1947) and landed an Oscar for John Wayne in True Grit. And Dorothy Lamour, that sweet, ever-befuddled foil for Bob Hope and Bing Crosby, never gave a good dramatic performance for any other director, but she did it for Hathaway twice, in Spawn of the North (1938) and Johnny Apollo (1940).

I'll have more to say about some of Henry Hathaway's movies later on. For now, take this as an introduction to the man, something to plug the hole in that encyclopedia I mentioned earlier -- just in case you happened to buy it from the thrift store I donated it to.
Posted by Jim Lane at 12:30 AM

Great blog! I have a super random question. I'm researching Aimee Crocker and Edmund Russell and I came across an account of a New York party in 1912, I think the Marquis named *might* be the grandfather you mentioned. It's too early to be Henry, but do you know the grandfather's lifespan? I wonder if he liked to party with New York's bohemians...

Thanks for dropping by, Courtney, and for your kind words. Thanks also for linking that amusing article from the New York World. I tend to doubt there's any connection between the Marquis Harry de Leonard mentioned there and Henry Hathaway. Henry was 14 (plus two days) when that article ran, and I suspect his grandfather had already passed away by that time. Even if he hadn't, my sources say the old man was firmly ensconced in San Francisco well before Henry was born in 1898. It strikes me as unlikely that he'd have been socializing with the New York art set in 1912.

Still, thanks again for coming by, and for leaving your comment. Come again!

Aimee Crocker was a San Francisco/Sacramento native who traveled the world, and sometimes called New York & Paris home. She was an heiress to the Crocker fortune (railroad $) frequently entertained, and her guests were the most amusing people of the day. Maharajas. Painters. Singers. Barons. Gangsters. Snake charmers. Magicians. Philosophers. Authors. I agree Henry was too young (and your site places him in SF at the time, unlikely a young person would travel to NY for no reason but to party with grownups and watch Nance Gwyn do the dance of the 7 veils--ha!) but if you happen to find a death year for the grandfather, please post it. Thanks again, and keep up the great blog! xo

I met Mr Hathaway's son today, and he was a really interesting man. I'm here on the internet doing a little research on his father because he gave me a bit of information and I wanted to learn a little more. What a remarkable man Henry was to work his way all the way up into the big leagues. I'm really impressed.

Thanks for dropping by, Unknown, and for leaving a comment. I hope you'll check out my other posts on Henry Hathaway; just look him up in the "Names" index. I need to resume my tour of his movies. Just received a beautiful 16mm print of Souls at Sea (1937), an excellent seafaring yarn that is ripe for rediscovery.

Trying to find out about actress Jean Hathaway. I found a fashion accessory from the flapper era that has the name Jean Hathaway engraved on it. I understand she died in 1938, which seems to fit the time frame of the piece I found.

Welcome, Streetshooter and thanks for dropping by! Very interesting find, that "fashion accessory" of yours. I assume it once belonged to Henry Hathaway's mother, but no telling, of course, how it made its way to you.