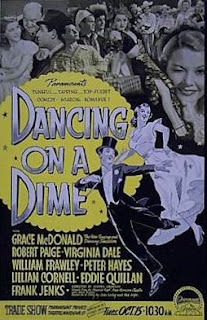 It's 1:15 in Columbus as I type this, and the 2010 edition of Cinevent has gone to bed. Monday's program wrapped it all up with Dancing on a Dime, a pleasant 1940 B-musical from Paramount; 1924's Lighthouse by the Sea, from the silent heyday of the original Rin Tin Tin; and Sarong Girl, one of striptease star Ann Corio's Poverty Row efforts to follow her colleague Gypsy Rose Lee into a Hollywood career.

Saturday is usually the biggest and busiest day at Cinevent, when it's hardest to find a seat in the screening room and the dealers' rooms are most crowded. You snake your way through the aisles between the tables, catching odds and ends of conversations, gasps of surprise or pleasure, reminiscences, polite dickering and the occasional faintly vinegary whiff of acetate film. On Sunday the dealers and their customers have already begun to trickle out for the trip home. By Monday morning it's down to a cadre of dedicated Cineventers unwilling to let the weekend come to a close without seeing the very last of it. There's a valedictory air in the screening room and hallway on Monday, and everyone is already beginning to look forward to next year. Everyone, that is, except the organizers of Cinevent themselves, who no doubt won't even give a thought to Cinevent 2011 until they've had a few months to unwind and decompress from this one.

I was surprised to see just how many people were there to the very end this year. It was nice having people to talk to on Monday, when I'm usually feeling quite lonely since most of my friends leave Sunday.

I didn't think much of Sarong Girl, but I like that you highlighted Dancing on a Dime. It was a fun little movie, wasn't it? You can't go wrong with musicals, and I think that's why year after year, they choose to close out the show with upbeat musicals. It is a small attempt to console us at the death of another year, I guess.

You're right, Samantha, there were more of us lingering to the bittersweet end this year, and I was pleased to see that. I've also been pleased and heartened to see, in recent years, more and more young people like you in attendance. My first Cinevent was '98, when I was [mumble]-ty- [mumble], and I think I may have been the youngest one there.

Also, checking out your nifty Dick Powell site (keep up the good work there!), I see that we chatted briefly in the elevator to the 6th floor; hope we get a chance to meet again next year.