Sunday, the last day of Cinevent 2016, got off to a vivacious start with a double feature showcasing that most utterly, charmingly, irresistibly delightful of movie stars, Clara Bow. Only the persistent prejudice against silent movies keeps Clara Bow from her rightful place among the movies' greatest stars -- in the minds of the general public, that is; true movie buffs know her worth. Greta Garbo and Marilyn Monroe, at the height of their careers, were never as popular or as sexy as Clara. But Greta and Marilyn are enshrined in the Temple of Screen Immortals, even to people who know them only by name, while the name of Clara Bow is something out of a quaint, distant, forgotten prehistory, like Nell Gwyn or Minnie Maddern Fiske.


This is unfair. To see Clara Bow at her best -- in Mantrap (1926), or in It or Wings (both '27) -- is to see someone who is still as animated and as immediately alluring as she was the day she reported to the set. Everybody who ever worked with Clara spoke of her ever after with a wistful smile. More to the point, the camera loved her as it has loved few other women who ever stood in front of one.


She's been the victim, perhaps, of the legend that her atrocious Brooklyn accent doomed her when sound came in. Not so. While it's true that the microphone terrified her at first, she rolled with the punch and gamely soldiered on. In her 11-year career she appeared in 56 features, and 11 of them were talkies. There was nothing wrong with her voice, any more than there was with Jean Harlow's (the two women's careers overlapped by a few years). Clara's sound pictures did reasonably well at the box office, though it's true, not as well as her silents. But that's not because Clara was talking now. The simple truth is that her day was passing, while Jean Harlow's was coming on.


I'll save any further thoughts for another day. For now, let's turn to Clara's Sunday double bill in Columbus. 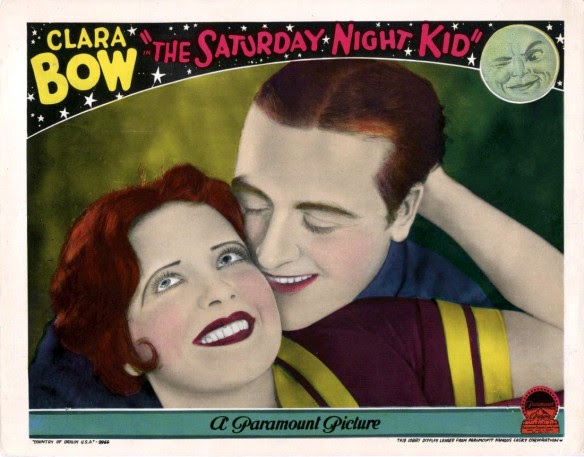 First came The Saturday Night Kid (1929), based on Love 'Em and Leave 'Em, a 1926 play by George Abbott and John V.A. Weaver. The play was filmed silent (also in '26) under its original title (and screened at Cinevent in 2010), with Evelyn Brent and Louise Brooks playing Mame and Janie Walsh, two sisters who work together at a big department store. Mame is the older, more responsible one, forever mother-henning her hedonistic, troublemaking kid sister Janie. For this talkie remake, Clara played the slightly renamed Mayme and Jean Arthur was Janie (though she was in fact five years older than Clara). Janie is a hell-raiser and borderline sociopath, playing the ponies with the store empoyees' charity fund, losing it, then blaming Mayme for the embezzlement -- and even trying to steal Mayme's boyfriend (James Hall). Clara wasn't looking her best (she was, just this once, a trifle overweight and a bit frowzy), but the picture was a hit in 1929 and it still plays well; when Mayme finally got fed up and slapped Janie clear across their bedroom, applause rippled through the Cinevent audience.


Next, Kid Boots (1926) was one of those oddities, a silent movie based (albeit loosely) on a Broadway musical comedy produced by Florenz Ziegfeld. Ziegfeld's star Eddie Cantor made his screen debut here, playing a man hired to flirt with a rich man's gold-digging wife and give the husband grounds for divorce. At a mountain resort, Eddie hits it off with the swimming instructor -- but their romance proceeds awkwardly because every time she sees him he's wooing somebody else. Since Eddie couldn't resort to song-and-dance, he was teamed with Clara (as the swimming instructor) for box-office insurance. It was a felicitous pairing. The two got along famously; Eddie helped Clara with her comic timing and she helped him learn how to act for the camera, and their rapport and mutual affection still come through on the screen. 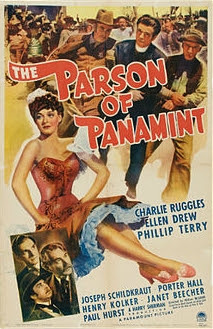 After lunch there was a new wrinkle this year. They called it the Audience Choice Picture: Earlier in the year, on the Cinevent Web site, those of us planning to attend were polled as to which of four titles we'd like to see screened in this slot. I can't remember what the four choices were, nor which one I voted for, but we wound up with The Parson of Panamint (1941), from a story by Peter B. Kyne. Like Kyne's perennially popular The Three Godfathers, the story was a parable. Charlie Ruggles (in a change-of-pace straight dramatic role) plays the mayor of the rough-and-tumble mining town of Panamint, California. The mayor goes to the big city of San Francisco to hire a preacher for his town's new church, and that's where he finds the Rev. Philip Pharo (Phillip Terry) -- not in a church, but taking the mayor's part in a saloon fight. The Rev. Mr. Pharo accepts the job and rides back with the mayor to his new congregation.

At first things go well between the parson and the townspeople. But as it becomes clear to them that he takes the Christian doctrine of "love thy neighbor" quite literally, his innate goodness begins to make people uncomfortable -- plus, his concern for the welfare of the town's gold miners incurs the enmity of the self-styled leaders of the community, who set about stirring up public outrage against him. The script by Adrian Scott and Harold Shumate, and Kyne's original story, bore obvious parallels to the life of Jesus (although -- spoiler alert! -- in the movie things work out rather better for the Parson of Panamint than they did for the Carpenter of Nazareth). The picture garnered good reviews but poor box office; today it's an unusual little jewel of a movie, marred only by a too-bland performance by Phillip Terry as the parson. But Terry was more than compensated for by others in the cast, especially Ruggles and Ellen Drew as a local saloon girl (the movie's equivalent of Mary Magdalene).

The Parson of Panamint was the final highlight of this year's Cinevent﻿, but the weekend didn't exactly end with a whimper. The last two features were The Tomboy (1924), a rural romance starring the now-forgotten silent comedienne Dorothy Devore (just the kind of scheduling Cinevent excels at, spotlighting former stars for whom there's no market on video but who deserve to be remembered); and King of Alcatraz (1938) a marvelously tight little Paramount B (running a lightning 68 min.) starring Lloyd Nolan and Robert Preston as frenemy wireless operators on a tramp steamer matching wits with an escaped crime kingpin (J. Carrol Naish) who hijacks their ship in mid-Pacific.

And so it was at 5:48 p.m. on Sunday, June 5, 2016, that the 48th Annual Cinevent Classic Movie Convention came to a close. I've posted on it in some detail, as I have in the past, because movie buffs everywhere should know about it and be encouraged to take it in. I haven't even touched on the dealers' rooms this year, though I once again acquired my share of books, videos, and memorabilia (some of which will no doubt find its way here from time to time).

As film festivals go, Cinevent is hard to beat. Financially, it's just about the bargain of the century: a pass for the entire weekend goes for less than you'd pay for a single screening at some classic film festivals. But it's more than that. Cinevent is a get-together of friends; historian and bestselling biographer Scott Eyman calls it "the most relaxed, friendly, unpretentious, accessible and enjoyable of the Cinephile Conventions." I hope to see you all there one of these years. Be sure to say hello.

There are changes afoot here at Cinedrome. That's why this series on Cinevent 2016 has taken longer than I would have liked: I've been working two blogs, in a way, putting together these posts on the one hand, while working on the other hand with my friend Jean at My Big Fat Sites to develop a new and (I hope) improved Cinedrome. This will be the last of my posts here on Blogspot, though I'll update this afterword with my new Web address when it's ready to be seen.

And oh yes, all previous posts will still be available (maybe, if plans work out, even more so) at Cinedrome's new location.
.
Posted by Jim Lane at 4:55 AM

I read your four-parter with great interest, Jim. Thank you for these wonderful insights on the features unspooled at Cinevent 2016. I can't wait to see the new and improved Cinedrome. Robert

Thanks for stopping by, Bob, and for your kind words. Thanks also -- and especially -- for encouraging me when we spoke at Cinevent to resume blogging here at Cinedrome. You lifted my spirits more than I can say. I'm glad you enjoyed these posts on this year's program; I hope they helped give you a sense of what you had to miss while you were at your table in the dealers' room.

Speaking of which, I'm on my way right now over to Goodknight Books to pre-order my own copy of your forthcoming book, which promises to be (cliffhanger alert!) as fascinating as your one on the death of Carole Lombard. Rest assured I'll be posting on this new book too.

You're right – she's been completely ripped off when it comes to having legendary status, like Harlow or Monroe. You can't help but love her when you see her on screen.