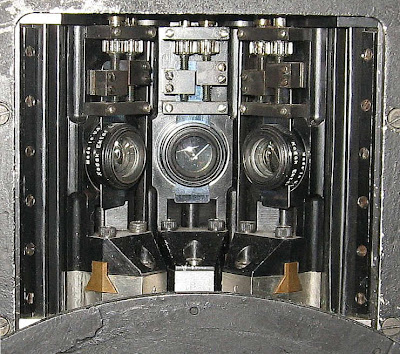 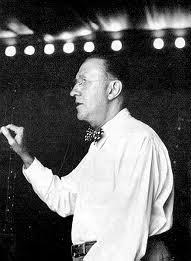 In 1962, under Nicolas Reisini, Cinerama Inc. acquired the Photo Instruments Division of Benson-Lehner Corp. in Los Angeles, renaming it the Cinerama Camera Corp. Reisini might (and maybe should) have dedicated the new corporation to resolving the technical problems in Cinerama, perhaps even reviving that 102mm camera. But he didn't. Instead, Cinerama Camera Corp. attempted to move into consumer products: a still camera that took 360-degree panoramic pictures, a wide-angle home movie projector, even (and I'll bet you never knew this) a home videotape recorder. All of these ideas lost money in research and development (the videotape recorder was 20 years ahead of its time), and by 1964 Reisini had been ousted from Cinerama. The untapped potential of that single-lens, 102mm, 146-degree camera -- Fred Waller's last brainchild -- is one of the great what-ifs of motion picture technology.
.
Posted by Jim Lane at 3:32 AM

I just an online search for a book on Cinerama, and all I can find is a Lowell Thomas' paperback, "This is Cinerama". So, what do you suppose this means? It means that you are poised to write a book about Cinerama. You've already done the research; you just need to put in book format.

Jim, I agree with Ruth: with all the work you've put in on this fascinating, riveting series, I think it's well worth putting together and marketing a CINERAMA book. I say put together a synopsis and go for it! For that matter, I'd make make sure it had plenty of pictures, too! Now I'm off to read your next installment! :-)