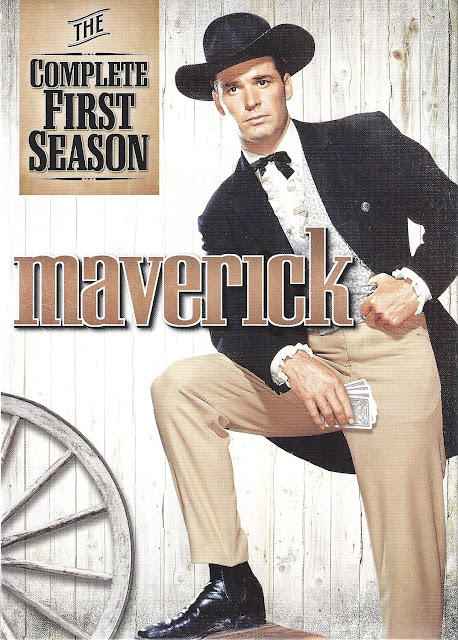 Deepest apologies to my patient readers for making them wait so long between posts. To tell the truth, my six-part series on The Magnificent Ambersons turned out to be a more exhausting effort than I thought it would be when I embarked on it, and my batteries have been slower to recharge than I expected. I do have some things in the hopper, though, to go up once they've ripened, so if you'll kindly bear with me, I'll try to make them worth the wait.

In the meantime, something else has cropped up that may delay me a little longer: Warner Home Video has finally delivered the long-promised Maverick: The Complete First Season, and I'm afraid just about everything must go on a back burner while I reacquaint myself with one of the Best. TV Series. Ever. Certainly the best western series -- pace Gunsmoke, Have Gun Will Travel etc. Not to mention the show that made James Garner an overnight sensation. It's available here from Amazon, and I think everybody in America should buy it -- if only to make sure that Warner stays with it and brings out subsequent seasons for me to add to my collection.

If plugging Maverick seems like an almighty stretch for a blog supposedly dedicated to classic Hollywood -- it's not. Maverick hails from a time (the mid-to-late 1950s) when Warner Bros. all but dominated prime-time television, even as it breathed the last gasps of the dying studio system. Here -- as in Cheyenne, Sugarfoot, Jim Bowie, 77 Sunset Strip, Hawaiian Eye, Surfside 6 and others -- was the last flowering of the legendary Warner Bros. stock company, with Garner and co-star Jack Kelly (as Bret Maverick's brother Bart) supported by a wonderful mix of seasoned veterans (Edmund Lowe, John Litel, Jane Darwell, Esther Dale, Stanley Andrews, Buddy Ebsen, Patric Knowles, Morris Ankrum) and rising young comers (Mike Connors, Clint Eastwood, Troy Donahue, Edd "Kookie" Byrnes, Efrem Zimbalist Jr., Roger Moore). The well-written stories were often recycled from Warners' B-westerns of the '30s and '40s (average running time 65 minutes, easy to trim down for an hour time slot minus commercials), and production values were enhanced by frequent trips to the Warner Bros. library of stock footage (that spectacular saloon brawl from 1939's Dodge City crops up time and time again).

Think of these episodes as B-westerns in the best sense -- economical, densely plotted, crisply directed, well-cast and -acted -- only delivered to your TV instead of to your neighborhood theater. Which, come to think of it, is where most of Golden Age Hollywood is playing these days anyway. Remember the name: Maverick. A legend of the West.
.
Posted by Jim Lane at 3:21 PM

Jim, I'm a big fan of the 1950s/early '60s Warner Bros. TV series, so I'm very pleased that you're giving it a shoutout! I had always heard about MAVERICK, 77 SUNSET STRIP, SURFSIDE SIX, and other Warner series, so I was delighted when they turned up on TV a few years back! They were always great fun, very much like mini-movies, and look at all the great stars who got their feet wet in those great shows. Thanks for the shoutout to the Warner Bros. folks!

Jim, I don't blame you for giving yourself a breather after your excellent epic MAGNIFICENT AMBERSONS saga, but I'm delighted that you chose to discuss the Warner Bros. TV series from the 1950s and early '60s! I only discovered them myself on reruns on what was then the American Life Network. I just loved 77 SUNSET STRIP (snap fingers twice here :-)), MAVERICK. SURFSIDE SIX, and many more! Glad to hear MAVERICK -- and others soon, I hope! -- is now available from the gang at Warner Archive!

By the way, Jim, not to shameless, but I hope your batteries will be be recharged in time for our upcoming THE BEST HITCHCOCK MOVIES (THAT HITCHCOCK NEVER MADE) Blogathon, starting July 7th and ending July 12th! It feels far away, but it'll be here before we know it. Looking forward to your STATE SECRET post! Rest up and come back soon, my friend!

Thanks for your post on the "Maverick" series. I've never seen this series but, based on your review, I'm anxious to check it out.