The Fog of Lost London, Part 1 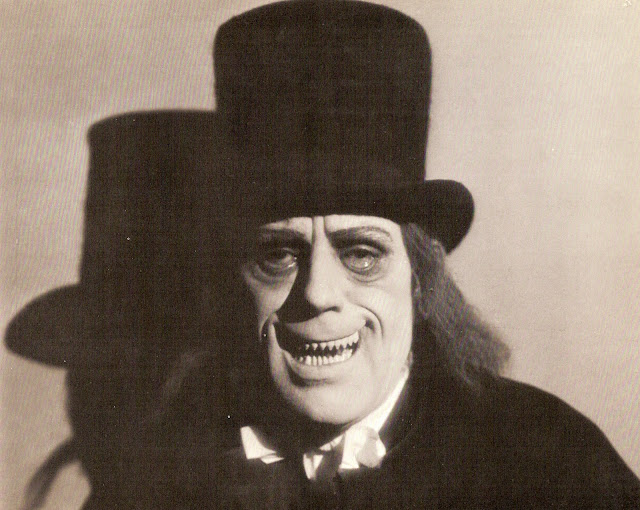 There are enough of these remnants that Philip J. Riley was able to publish a reconstruction of Tod Browning's movie in book form, but if you didn't have the opportunity or good sense to pay $29.95 for it in 1987, you'll have to shell out ninety bucks or more now. A few years ago Turner Classic Movies did a similar reconstruction, this time on film, and that one's available on The Lon Chaney Collection.

In 1970 the Museum of Modern Art staged a "Lost Films" exhibit and published an accompanying book by the same title. At least two of the pictures in MoMA's exhibit -- Street Angel (1928) with Janet Gaynor and Charles Farrell, and Rex Ingram's The Garden of Allah (1927) -- have surfaced since then, so there's always hope. But London After Midnight remains lost, and the pages devoted to it in the MoMA book are sparse. Author Gary Carey wrote: "It is almost impossible to synopsize a mystery film which one has not seen because critics, bound by professional ethics, divulge little of the plot let alone its solution."

But back to London After Midnight. There's always hope it may someday surface, like Street Angel and The Garden of Allah, but it hasn't happened yet; the last known print was destroyed in a studio fire in the 1960s. Director Browning did a loose remake in 1935 -- Mark of the Vampire, with Bela Lugosi and Lionel Barrymore taking over the equivalent roles that were both originally played by Lon Chaney -- but that time Browning made major changes; for one thing, the new picture didn't even take place in London. If we want any sense of the original, we still have to depend on the Riley and TCM reconstructions. 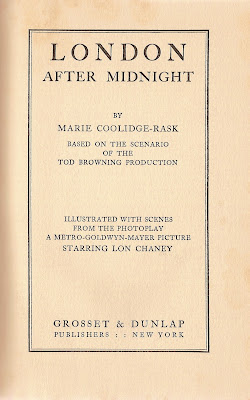 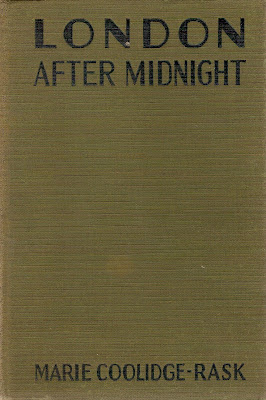 Or...there is this. I came across this book while perusing the shelves at the estate sale of a popular Sacramento TV personality. The novelization is the work of Marie Coolidge-Rask, who evidently made a decent living out of this kind of piecework. She's known to have also novelized Mary Pickford's Sparrows (1926) and the King Vidor-Lillian Gish La Boheme that same year (now there's a literary platypus for you: a novelization of a silent movie of an opera).
Otherwise, Ms. Coolidge-Rask's literary output seems not to have left much impression on the shifting sands of time. These movie tie-ins weren't a terribly lucrative field for the writer-for-hire; usually there was just a flat fee -- probably, in the 1920s, no more than a thousand dollars or so, if that -- and that was that, no royalties. A shame, because London After Midnight may have sold pretty well; Mori's opinion notwithstanding, the movie was the most successful Browning-Chaney collaboration. Whatever MGM or Grosset & Dunlap paid her for her efforts, I hope for her sake she invested it wisely.
In any case, she doesn't seem to have slavishly followed Browning and Waldemar Young's script: Her novel features at least one character, a certain Colonel Yates, who doesn't appear in the movie's cast list on IMDB. And she isn't bound by the limits of silent movies -- her characters are certainly a talkative bunch. For that matter, so is Ms. Coolidge-Rask herself -- she crams words in like a canner stuffing sardines in a tin. Here she is describing Sir James Hamlin (Henry B. Walthall):

I don't know what kind of scientist would pin a fly to the wall to see it through a microscope, but I suppose Ms. Coolidge-Rask might have known some.
Anyhow, now, just in time for Halloween, I propose to spend the next few posts hacking through the purple undergrowth of Marie Coolidge-Rask's prose (I do these things so you don't have to), distilling it into a chapter-by-chapter synopsis of her novelization. In this way I hope to get some sense of what audiences at Browning's vampire/murder mystery might have seen in 1927 -- sort of like Tod Browning, Polly Moran and Lon Chaney here pretending to commune with the spirit world for the MGM publicity department. This will be, so to speak, by the book, without reference to either Philip J. Riley's or TCM's reconstructions; if there are differences, maybe we can talk about those later.
So be warned: if you're worried about spoiling the ending of London After Midnight (which you can't see anyhow) or Mark of the Vampire (which you can), proceed at your own risk.
Posted by Jim Lane at 5:31 PM

William K. Everson was probably the last person to have seen "London After Midnight," having arranged a screening at the MGM in the '50s. "Disappointing" was the operative word. This jibes with Forry Ackerman's memory of having seen it on its original releasd.

I suspect you may be right, Kevin. Mori of Variety was certainly not overly impressed. And one thing I've noticed from reading Variety's reviews over the decades is that they are invariably astute, regardless of who is writing. Variety's assessments of individual pictures tend to hold up quite well 70, 80, even 90 years later; I have not always observed this to be the case with the New York Times.

Hi, I just stumbled on your blog, Marie Coolidge Rask was my great aunt. While I never got to meet her (she died before I was born) my father said she was a lovely woman.

It's so nice to see people still appreciate her work.

Welcome, Victoria; delighted to hear from a member of Mrs. Rask's family. I knew nothing about her beyond reading London After Midnight (before coming into my hands, my copy once belonged to one Paulyne Frances Rowell) and the references I found to your great aunt having also written Sparrows and La Boheme. If you care to share any biographical information about her, I'll be happy to include an update to my text.

Jim, you had me at "a novelization of a silent movie of an opera"! :-) Like many movie fans, I've always been curious about LONDON AFTER MIDNIGHT and attempts to try to reconstruct it. Amazing how wordy silent movies could be! :-) But seriously, I'm quite intrigued, and I plan to read the other 3 installments by reading one installment each day, so it'll feel like I'm following a serial. I'm enjoying this so far; great job of writing and research, as always!

Thanks, Dorian! Needless to say, you're one of the new friends I wanted to share these year-old posts with, so I'm glad you're enjoying them so far. I hope you like the rest as well.

Well...I'm one who doesn't know of (or has, thanks to sands-through-the-hourglass, misplaced the memory of) "London After Midnight." But I am about to eagerly consume the remaining three installments of your 4-part examination. Extremely interesting stuff and, as ever, superbly written, Jim.

Thanks, Eve -- for all of your comments, Parts 1 through 4! Maybe someday we'll get a chance to compare Marie Coolidge-Rask's creativity more directly with Tod Browning's, but until then...but maybe I'd better say no more, in case other readers haven't read the rest yet.