C.B. Gets His Due 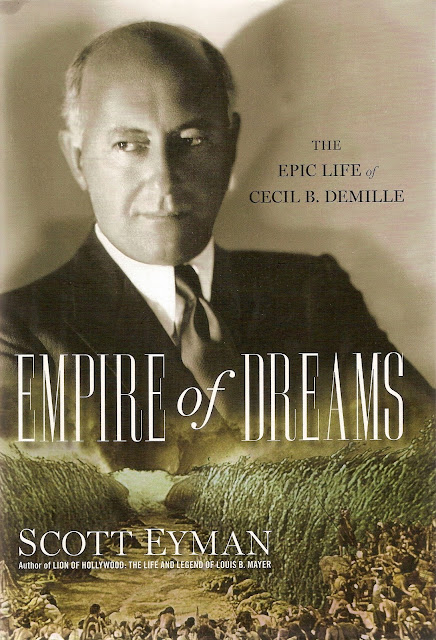 Here's another book review, but with a difference. While the subject of my last post, Florenz Ziegfeld, was only peripheral to the Hollywood story, this one is right smack dab in the middle of it. The book is Empire of Dreams: The Epic Life of Cecil B. DeMille by Scott Eyman.

I'm still reading Empire of Dreams, but I know gold when I find it. Besides, when you're digging in the Scott Eyman mine, your odds of hitting paydirt are always good. Scott wrote The Speed of Sound, one of two indispensible books on the transition to talkies (the other is Richard Barrios's A Song in the Dark). He also wrote Lion of Hollywood: The Life and Legend of Louis B. Mayer; Mayer was often (and often justly) detested in his time, but Eyman gives us a warts-and-all portrait to counter the warts-only bogeyman of legend, humanizing Mayer and giving the devil his due. And speaking of legends, there's Print the Legend: The Life and Times of John Ford; Eyman himself "prints the legend" along with the truth, and shows how the one derived from the other. Add biographies of Mary Pickford and Ernst Lubitsch among his other books, and Scott Eyman has covered some of the most revered and reviled figures in movie history.

Cecil B. DeMille, in his day and since, was both. Personally, I've gone from one extreme to the other on DeMille, then most of the way back again. My uncle took me to The Greatest Show on Earth when I was four; God knows it's no work of art, but it set the image of the circus for me forever; no real circus has ever lived up to it. Then there was The Ten Commandments (1956); for me, as for anyone else who first saw it at the age of nine or ten -- I say this without fear of contradiction -- DeMille's movie was the Book of Exodus brought to life once and for all. Yes, the pillar of fire that holds back the Egyptian chariots and later carves the Commandments at Mt. Sinai is only ink-and-paint animation -- any child could see that even in 1957. But it didn't matter. Charlton Heston was Moses, Yul Brynner was Rameses II, and that sure as hell was the parting of the Red Sea. (And giving DeMille credit, he wasn't any happier with that pillar of cartoon fire than I or my friends were. But money and time grew tight during post-production and he had to cut some corners. Then, once the movie was released, that was that as far as he was concerned; the age of a Steven Spielberg or a George Lucas tacking expensive afterthoughts onto a hit movie was still years in the future.)

The zenith (or nadir) of my contempt for DeMille's brand of moviemaking was about 1971, in my college know-it-all, tear-down-the-titans phase. I remember writing that year that Ken Russell's movies were no better than Cecil B. DeMille's. "No better," indeed; in fact, Russell's movies -- all of them -- were a good sight worse. I like to think (now) that I knew it even then, but I was certainly too hip to say so. Then, fifteen years ago (more or less), I had mellowed toward the old boy; when The Ten Commandments played a revival date at a local theater, I wrote, "Cecil B. DeMille may have been a sanctimonious old humbug, but he sure knew how to put on a show."

Well, I was getting warm -- in more ways than one. In fact, as Scott Eyman proves beyond arguing, Cecil B. DeMille had a career absolutely unique in movies -- or any other form of show business, for that matter. He was the first superstar movie director after D.W. Griffith, and he was still riding high thirty years later, as Griffith was fading away in boozy neglect at the Hollywood Knickerbocker Hotel. Thanks to his nine-year stint as host of The Lux Radio Theatre, DeMille was a nationwide household name at a time when few Americans knew or cared who directed the movies they saw every week.

When C.B. came to Hollywood in 1913, it was a sleepy wide spot in the rural road several miles from Los Angeles, surrounded by sagebrush, rattlesnakes, wolves, deer and jackrabbits. By the time he shuffled off his mortal coil in 1959, the town was home to Ciro's, the Brown Derby, the Hollywood Bowl and Grauman's Chinese Theatre -- not to mention the very idea of "Hollywood" itself, which DeMille and his fellow pioneers had such a hand in creating.

They say one of the components of an epic story is that it portrays great changes in the land. By that measure, Eyman's subtitle, The Epic Life of Cecil B. DeMille, is more than just a play on the kind of picture most associated with DeMille. It is an epic story, and DeMille's was an epic life. Larger-than-life characters -- that's another ingredient of the epic, and DeMille was that, too: grandiloquent and intimidating to many, but he attracted a stock company of actors and a core of designers and technicians who stayed with him for decades, some for the rest of their lives, others for the rest of his.

DeMille came to movies as a struggling actor-playwright firmly grounded in the theater of the 19th century; his father's partner, and Cecil's own role model, was David Belasco. Cecil embraced the cutting-edge technology of early movies with eager arms, just as he would in time embrace talkies, Technicolor, the wide screen and stereophonic sound. But he never lost that Belasco worldview. One of the most interesting insights in Eyman's book comes, oddly enough, from the costume designer Adrian, who worked two years for DeMille before settling into his throne at MGM: "He believed in his world ... a world of antiquity from which he rarely emerged." As Eyman himself puts it, "DeMille would remain his father's son, a nineteenth-century man of the theater -- his greatest strength, as well as his greatest limitation."

Scott Eyman has a historian's thoroughness, and for Empire of Dreams he had access to Cecil B. DeMille's archives, which run to some 2,000 boxes now housed at Brigham Young University in Provo, Utah. Equally important, he has a critic's perception and perspective. That combination makes all his books worth reading, and this one especially, because DeMille and his career really were unique. Eyman sheds light on all the facets of DeMille's work: the innovative artist of the early silents, the monumental presence of the talkies, and -- always -- the showman. I'm loving it.
.
Posted by Jim Lane at 1:47 AM

Ah, books! Was there really a time when I read at least one a week...sometimes more? Now, I get sleepy so quickly, it takes me forever!! But this one sounds like a must.

It is indeed a must, Jean. Maybe Scott will come out with an audiobook; he certainly has the voice for it.

You wouldn't have your writings on DeMille available from that period. I am writing a PhD on DeMille and changing attitudes towards the man. I would be very interested in looking at it.

You wouldn't have your writings on DeMille available from that period. I am writing a PhD on DeMille and changing attitudes towards the man. I would be very interested in looking at it.

Kevin, my swipes at DeMille came in the course of reviewing Russell's The Devils when I was a student at CSU Sacramento; the review was published in the State Hornet (campus paper) for 10/3/71. I do indeed still have the review, and would be happy to share it if you think it'll help (must say, while my opinion of DeMille has changed, my opinion of Russell hasn't). The "sanctimonious old humbug" line was written for the Sacramento News & Review before the days of online archives; I'm afraid I can't lay my hands on that one (it's around here somewhere, but...). For The Devils, send me your e-mail and I'll send you a Word doc transcript of my review.

Thanks for stopping by; hope you return often.